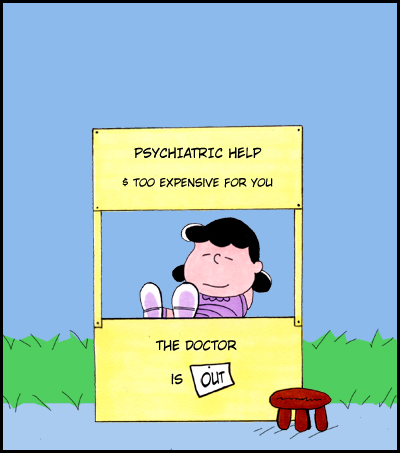 I know many people have enormous difficulty accessing therapy for depression- but as someone who has benefited for it, provided it, and supervised others, I realize how fortunate I’ve been, and how important it has been personally for me. Antidepressants have helped me with many of the symptoms of depression, but I still needed to sort out the conflicts and problems in my life that had contributed to the emotional mess in which I found myself. We keep hearing how there will be medication tailored to suit each individual some day, but I don’t think there will ever be a tablet labeled ‘take two a day to come to terms with how you feel about your mother.’

Over a period of about 12 years, during my twenties and thirties I underwent psychodynamic therapy, something in which I had also had some training – with 3 different therapists. Two of them helped me but there was one with whom I simply could not ‘gel’. Finding a therapist with whom you can make some kind of emotional connection is essential. I was able to learn how the problems in my childhood and the dysfunctional relationships I had with both of my parents were still affecting my adult life. I’m quite sure that, at the time, that was the best type of therapy for me. There were some major unresolved issues from my childhood and adolescence that  interfered with my ability to make stable, trusting relationships. I had also spectacularly failed to grieve for my father, who died when I had just qualified as a doctor. There was a period of a few years in my late twenties when my emotional life can only be described as chaotic. With therapy I was able to access the parts of my personality that I had been desperately trying to keep under control, but sometimes the new and more assertive me who emerged from the chrysalis of therapy was more of  an abrupt and outspoken moth still seeking the light of day, than a perfectly finished social butterfly. Nevertheless talking therapy helped me to address some of the difficulties that I had in the major relationships in my life and embark on what has been a successful second marriage.

Later, when undertaking a course of cognitive behaviour therapy (CBT), I found ways to begin to manage the way I ruminate about being me in this world and to cope more effectively with people in day-to-day life. Therapy was anchored in the present, not the past and I began to learn much more about how my mind actually worked. I could identify my previously unspoken, but very difficult to live up to,‘Rules for Living’ from David Burn’s book the ‘Feeling Good Handbook’, and I began to understand how attempting to live up to my internal very high but often conflicting standards, led to experiencing anxiety in everyday life. It is six years now since I completed that last course of therapy and I am beginning to realize just how long it can take for it to work. I still continue to have new insights into why I am the way I am, and what triggers and sustains those periods of anxiety and low mood, as life goes by. Life is a ‘work in progress’, or at least that is how it has seemed for me.

What most people get offered now in the first instance now is brief therapy, mostly based on CBT principles. For many people that will be very helpful- and when I was supervising a primary care based team of therapists, I saw how effective it could be- particularly if the behavioural aspect of CBT – behavioural activation- was employed first. CBT is very much about ‘doing’ things to feel better. Like setting goals for activities that you may have stopped doing. Or actively trying to address the depressive automatic thoughts that can both trigger and maintain depressed mood- both with the aim of getting you out of the shadow of depression to which you retreated when you lost the energy to fight anymore. In some ways the conceptual basis of brief CBT based therapy isn’t all that different from medication- in that both seek to ‘activate’ either your mind or your body. You get going and take up your life again. You are ‘fixed’ at least for the present as your deficit, of either serotonin or self-esteem ,has been addressed, as Alain Ehrenberg in his book on the sociology of depression, ‘The Weariness of the Self’, clearly describes. And in today’s climate you must of course take responsibility for helping yourself to get fixed- through self-help or presenting yourself at the doctor’s office.

CBT helped me when I was struggling with  my depressive ruminations and it was the right therapy at the right time. But when I was younger, and I couldn’t make sense of who I was or wanted to be, I needed time to build up trust in a therapist, and work on the complex problems from my past that actually interfered with me engaging in therapy in the first place. As I wrote recently, the simple ‘fix’ doesn’t work for a significant number of people who are depressed- particularly those dealing with painful conflicts and the impact of trauma- and we realistically should not expect it to. They need what I was fortunate enough to receive, but it is less available than ever- not only because of cuts, but the prevailing view that depression in primary care is something that can be ‘fixed’. Some people need time to engage, to trust and to work out how to discover who they are and learn how to forgive themselves for even being alive. Some who don’t respond to the simple fix are labeled as having borderline personality disorder- and their anguish is downgraded to ‘distress’ but they too are experiencing something that is only one aspect of the many faceted but hard to define experience that we call ‘depression’. I can assure you that it is real and those who suffer from it kill themselves.

Those who need more than the quick fix are  just as deserving of our attention- and our help.